On Wednesday the 27th of February the first playtest of Labour Games took place. Labour Games is a project where a few games are developed to help people find their way on the labour market through playful design and data analysis. During the playtest eight students came together to try out the three games: Hold Your Temper card game, Hold Your Temper app and First Impressions.

The afternoon started with a little shaking it off and a round of newspaper smash to learn each other’s names. As soon as everybody was warmed up, we proceeded with the first real playtest of the Hold Your Temper card game. This game exists of four categories of cards: roles, emotions, situations and interventions. Each player draws a role-card and emotion-card, as a team they draw a situation-card and in the case the game asks for it, an intervention-card is drawn.

In the heat of the game, the students became enormously fanatic to gain as much points as possible. Luckily, there was also room for laughter, mostly regarding the acting of others. After the three groups were done playing, the digital version was tested as well. Testing that asked for a little more effort, as the game had to be downloaded quickly, the players had to get connected to each other, and as soon as the app was opened the game started. This resulted in some funny situations, eight guys talking to a screen as if they were a jealous director, proud janitor, or happy HR-employee in an organisation. 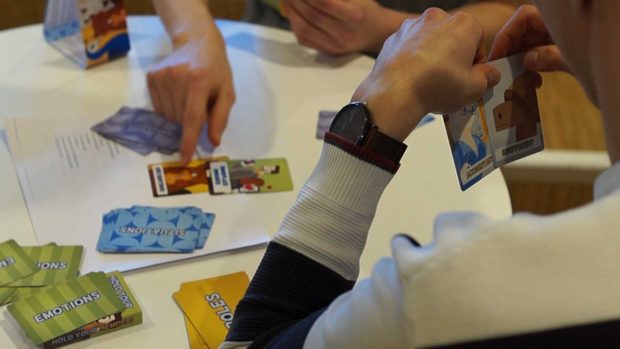 The day ended with testing the First Impressions game, which meant the guys had to step into the shoes of a recruiter. Although the students noted it was more like an application than a game, they were enthusiastic and shocked after testing it. It seemed quite confronting to see how many prejudices you would have accepting an applicant.